Is Elderberry an Option for C0v!d-!9? 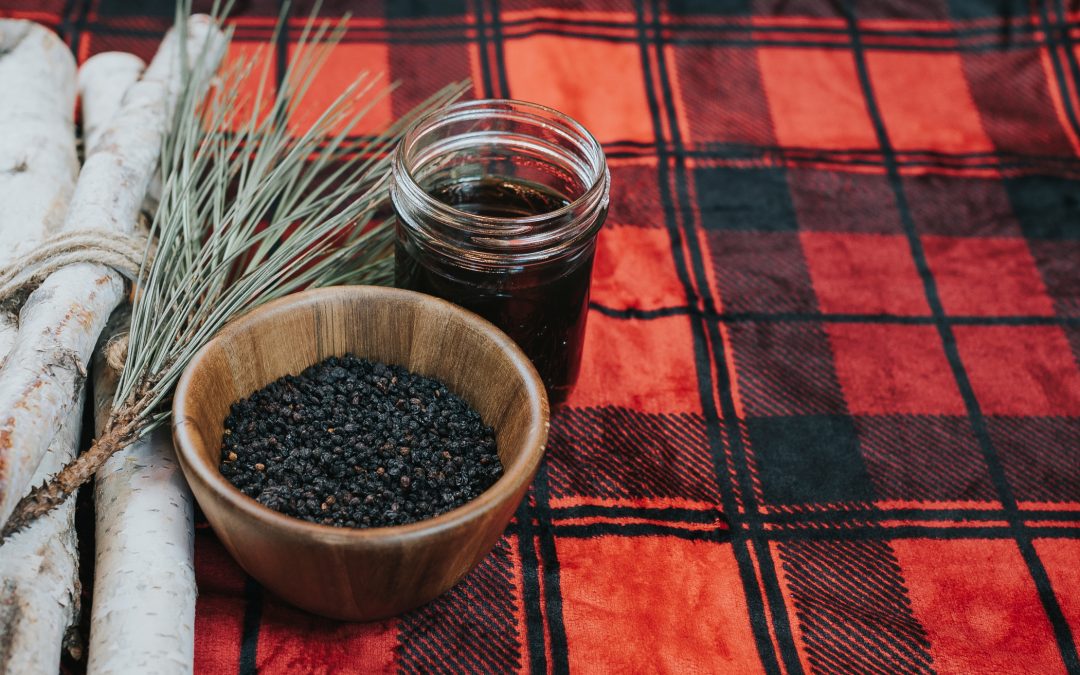 Elderberry: A Common Herb and Its Powerful Potential for Combatting C0v!d-!9

Prelude.
This article is written with intentional misspellings to combat the deadlier v!rus: censorship. At the time of publication, the natural health industry is under attack and many whistleblowers are being silenced. If you’re a part of our m3d!cal freedom community, you’re well aware of what’s going on. If you’re new here, this has been a sizable issue we’ve been battling for the last few years.
****

Since the dawn of humankind, people have faced biological challenges and fought threats to their health and well-being. Even in the modern era, where life is more sanitized and machines often take the place of grueling physical labor, people must still power through sickness and physical suffering. Americans spent $539 billion in medications in 2020 (about $1,700 per person) with hopes of alleviating their aches and battling illnesses ranging from common colds to cancer. With the emergence of C0v!d-!9 (S@RS-c0V-2) in 2019, the world scurried to find survival tools. Efforts to treat C0v!d-!9 have included distributing vaccines, administering Remdesivir, securing prescriptions of Ivermectin and treating patients with monoclonal antibodies. Drugs—and their potentially harmful side effects— have certainly garnered attention in helping people to survive the scourge, but other pathways, including natural remedies and nutritional supplements, have gained significant traction. Scientists are still researching to build a body of evidence, but the historical use of elderberry offers insights on how it may provide a natural pathway to support the body’s immune system and combat C0v!d-!9.

The Healing History of Elderberry

With a quick click through television or online programming, it is obvious that drug companies pump billions of dollars into advertising to promote the latest and greatest pharmaceuticals. Each day brings the release of a new pill that promises relief from whatever ails us, but for thousands of years, the common elderberry has been recognized across continents as a healing herb. There are about thirty species of elder plants and trees in the world; Sambucus nigra (referred to as the European elderberry or black elder) and Sambucus canadensis (the American black elderberry native to areas east of the Rocky Mountains and south to Bolivia) are often the species selected for medicinal purposes.

Archaeologists have discovered elderberry seeds associated with humans living during the Stone and Bronze Age. During that time, people used the fruits, bark and branches. Throughout Europe, black elderberry (Sambucus nigra) is mentioned as a medicinal tool in texts from ancient to modern times. In The Elderberry Book, farmer John Moody notes that there is evidence of elder seeds in sites more than 9,000 years old. Hippocrates, known as the Father of Medicine, kept copious notes about the use of the elder’s roots, leaves and juice. Folk remedies prescribe elderberry juice to treat infections, influenza, headaches and nerve pain. British herbalist Pamela Michael recalls affirmations about elderberry use from English botanist William Coles (who lived from 1626-1662) in Edible Wild Plants and Herbs: “There is hardly a disease from the head to the foot, but it cures.” History buffs will find medical and culinary books from America’s first 150 years filled with references to elderberry. Often described as a natural cure by country people, modern herbalists consider elderberry an important restorative plant. In fact, Doctors of Osteopathic Medicine, often open to offering patients options to pharmaceuticals and surgery, have used elderberry syrup to help patients power through deadly pandemics. For example, visitors to the ATSU Museum of Osteopathic Medicine have learned how doctors in Kirksville, Missouri prescribed elderberry syrup to fight the 1918 “Spanish Flu” pandemic. On the other side of the world in North Africa, black elderberry growing in the mountains of Tunisia and Algeria is used to make tea to fight hypertension, while the juice is used as an anti-inflammatory. Indeed, humankind has recognized the elderberry as a simple herb with the capacity to provide supreme support to the body’s immune system.

Elderberry’s Potential as a Powerful Punch Against Influenza and Cºv!d

A severe flu season in 2018 sparked consumer interest in elderberry, and after the Cøv!d p@nd3mic began, elderberrry sales increased 168.9% in 2020 as more and more people began looking for ways to strengthen their immunity. With its anti-inflammatory and antiviral properties, elderberry supplements (especially extract and syrup) may be considered a strong intervention for illnesses. Since influenza and C0v!d-!9 attack the body in similar ways, it is helpful to compare symptoms.Like the flu, C0v!d-!9 is a contagious respiratory dis-ease caused by a virus that can be spread through respiratory droplets that are released when a person coughs or sneezes. Influenza and Cøv!d can also spread through the simple act of talking, as aerosols released during a conversation can be inhaled by someone nearby. Droplets can land on another person’s nose or mouth, potentially infecting others with the virus. According to the Centers for Disease Control and Prevention (CDC), patients suffering with Cøv!d or the flu may experience the same symptoms: fever, cough, exhaustion, runny (or stuffy) nose, headache, and muscle aches. Though both viruses can cause disruption in the ability to taste and smell, this symptom is more prevalent with Cøv!d-!9. As patients become sicker, serious complications such as pneumonia, acute respiratory distress system, organ failure, heart attacks, brain and heart inflammation, and death may arise from either virus. It can be challenging to tell the difference between the flu and Cøv!d-!9, which is why there is a need for testing. Since flu outbreaks have occurred throughout the last century, there have been rich qualitative and quantitative scientific studies on the efficacy of elderberry.

One key scientific finding is Sambucus nigra’s elevated levels of flavonoid compounds, called anthocyanins, which have strong antioxidant capacity. Taking Sambuca nigra within the first 48 hours of symptom onset has lessened influenza symptoms such as fever, headache, nasal congestion and mucous evacuation in adults. Studies indicate that Sambucus nigra could speed recovery time, and a meta-analysis of existing clinical research indicates that “supplementation with a standardized elderberry extract is significantly effective at reducing the total duration and severity of upper respiratory symptoms, regardless of the cause of the symptoms.” Elderberry, rich in antioxidants, may prevent damage to the immune cells by neutralizing the free radicals that harm the body’s cells and lessen immunity. A University of Sydney study indicates that elderberry has a potent direct antiviral effect against the flu virus, as it blocks viral proteins responsible for the viral attachment and entry into host cells.

Throughout the Cøv!d-!9 pandemic, there has been much discussion about vitamin intake and its impact on recovery. According to the USDA Food Composition Database, elderberry is rich in vitamins. A cup of elderberries is filled with an abundance of vitamins and minerals:

Studies continue to show that incorporating elderberry juice or extract, in combination with vitamins B and D, along with Zinc, boost the body’s immune system.

Elderberry also contains quercetin (a polyphenol, or plant pigment), which serves as an antioxidant, anti-inflammatory and immunomodulatory. Quercetin can be a tool for managing inflammation—one of the conditions that leads to loss of taste and smell. Inflammation makes breathing more difficult, can contribute to lung problems and can lead to death from Cøv!d-!9. Quercetin can prevent viruses from infecting healthy cells, reduce the number of viral infected cells from reproducing, and lessen the resistance of infected cells to antiviral medications. Chinese Clinical studies in immunology are examining the synergistic therapeutic effects of quercetin when co-administered with Vitamin C, a combination occurring naturally in elderberry. There is evidence that quercetin and Vitamin C provide a strong antiviral action, and research continues to further understand quercetin’s ability to inhibit the ability of Cøv!d-!9 to enter the body.

Perhaps elderberry’s most powerful punch comes in its role as a potential preventative for Cøv!d-!9. According to a 2021 Turkish study, “Considering all the studies, elderberry is one of the strongest candidates” in staving off infections. A study released in January 2022 from the United Kingdom finds that elderberry extract has the power to suppress viral replication. UK researchers have also determined that elderberry extract offers cardioprotective properties, and these can be especially important because Cøv!d-!9 can damage heart muscle and affect heart function.

Could Elderberry’s Fight Against Cøv!d-!9 Cause a Cytokine Storm?

As elderberry has been acknowledged for its healing properties, there has been speculation about the potentially harmful effects of using elderberry (or echinacea) to treat Cºv!d. One concern is that elderberry might induce or exacerbate a cytokine storm, a condition that arises when an infection triggers the immune system to flood the bloodstream with inflammatory proteins, called cytokines, causing organ damage and even death. Director of the North American Institute of Medical Herbalism Paul Bergner notes that the fear of herbal induced cytokine storms arose during 1997 and 2003 outbreaks of Bird Flu (H5N1) and during a S@R$ Cºrºnav!rus outbreak in 2003. It is essential to understand the timing of cytokine development to truly assess the role of elderberry in aggravating it. In the end, Berger asserts that early treatment with elderberry could moderate the symptoms and the severity of illness and could prevent the progression to pneumonia and severe disease that leads to cytokine storms. He adds that Sambucas has been shown to promote inflammatory and regulatory cytokines in research trials, and a key approach to treating late-stage illness that could evolve into cytokine storms is to normalize and optimize vitamin D levels to promote antiviral respiratory immunity, antibacterial immunity in the airway, and reduce secretions of inflammatory cytokines. Additional research proves that most patients are already in severely compromised conditions when they experience a cytokine storm and that it is highly unlikely that elderberry would cause such a response by itself. Ultimately, there are no causative links between elderberry and cytokine storms.

More on this topic here.

Elderberry and the Future

The Cøv!d-!9 p@nd3mic has begun to wane, but scientists warn that a future coronavirus outbreak could hit humanity hard. New drugs will emerge to treat respiratory viruses, but botanical interventions—such as elderberry syrup—will provide affordable options for people looking for natural approaches to wellness. Though more scientific studies on the efficacy of elderberry are needed, the health benefits of this super food have stood the test of time. Again and again, researchers are reinforcing the theory that elderberry syrup has the power to boost immunity without side effects that often accompany pharmaceuticals. Ben Franklin noted in Poor Richard’s Almanack that “an apple a day keeps the doctor away,” and scientists are recognizing that just one tablespoon of elderberry syrup a day may have the same effect—making it an important ingredient in modern medicine chests.

Don't miss out on all of the healthy things you can do with elderberry & elderberry syrup! Stay well during cold, flu, allergy and COVID seasons.