A Spotlight on Star Anise in Elderberry Syrup Recipes 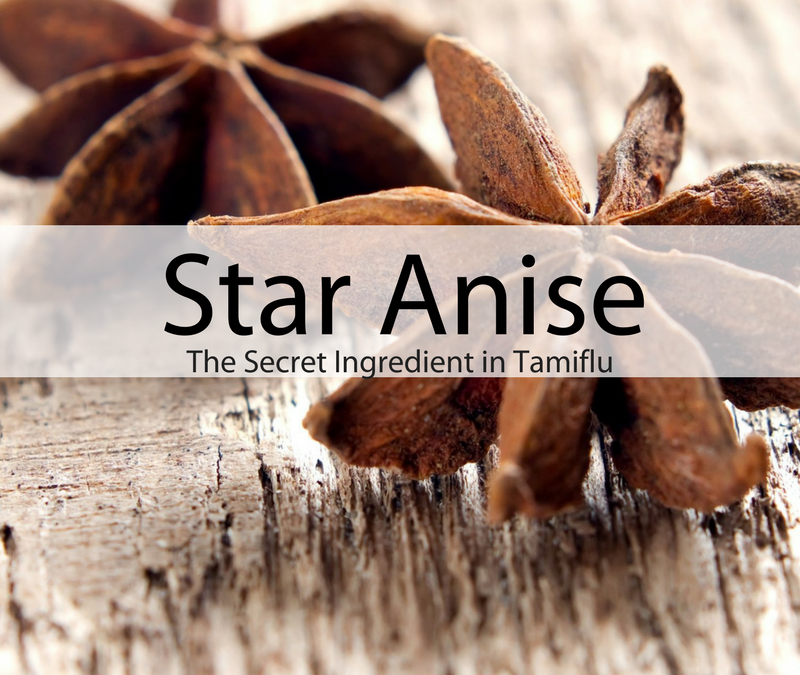 Star Anise steals the show for my elderberry syrup recipe. It’s the key ingredient that makes my blend the most premium and potent in the market. It’s also contributes to the zip and zing flavor we love. I’ve formulated my proprietary blend with this herb because of the unique medicinal qualities, providing our immune system with another layer of protection, above and beyond all other elderberry syrup products commercially available and those from other hobby-based crafters.

Did you know?
Tamiflu, the prescription medication used to treat AND ‘prevent’ flu amongst exposed individuals contains a natural component? And what is this powerful ingredient? None other than the common herb, star anise.

In fact, most people are unaware that over 40% of all pharmaceutical medications come from plant botanicals, including everything from common aspirin to powerful cancer-fighting medications such as tamoxifen [1].

The Origins of Star Anise
Star anise, or Illicium verum, is a native plant of Asia, commonly used in traditional societies to spice food, reduce intestinal gas, aid in digestion and act as a powerful dehydrator.

It is also known to promote vitality and vigor in the human system, and is a common ingredient in the French liqueur Pernod. This fragrant, licorice-spiced plant is now playing a starring role in one of the most sought-after drugs on the planet: Tamiflu.

The manufacturer of the drug Tamiflu is Roche, based in Switzerland. Through a highly secretive process, the company uses large amounts of common Asian star anise to obtain shikimic acid, one of the principle active ingredients in Tamiflu. In fact, without star anise, there is no Tamiflu, as these eight-pointed seed pods gleaned from the Chinese evergreen, are sed for massive production of the drug.

In 2005, in response to the SARS avian flu, there was a temporary shortage of star anise due to its extensive use in creating Tamiflu [2]. During the 2005 scare, the drug company began to make shikimic acid artificially via a process of using fermented and bioengineered E. coli bacteria.

Currently, the US government has about 12 million boxes of Tamiflu on hand. In the event of a global pandemic, this would only serve a small percentage of the American population; certainly not enough to cover nation-wide health needs in the event of an emergency. And as Tamiflu is, so far, the so-called planet’s only defense in the event of a swine or avian flu pandemic, and even though millions of courses are available, one single manufacturer holding a tightly-sealed patent simply cannot create enough of the drug quickly enough to serve global needs in the even of a true pandemic.

For this reason, some governments are demanding that the company release their sealed patent, enabling other companies to make their own version of the star-anise infused remedy. What is more, Tamiflu can’t prevent you from getting swine flu or even kill swine flu; it is a toxic product and can create a grocery list of symptoms. And, according to the manufacturer it only reduces the symptoms of flu for the first 36 hours.

I am highly against the use of this drug and believe that most of these flu pandemics are actually created/exacerbated by man and create fat pockets for big pharma. This has been verified by Dr. Len Horowitz and many others [3].

So, rest assured that every ingredient in my organic elderberry syrup has been carefully selected and researched for it’s immune-boosting, and cold/flu-fighting properties (among the MANY other benefits it provides, which many of you have reached out to tell me about–THANK YOU!)